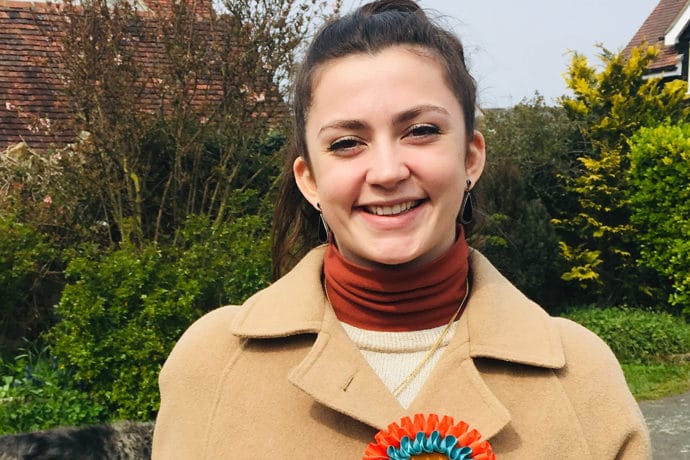 While back from University for a few weeks Great Chesterford resident Shiona Luke joined the canvassing team for Independent candidates in the District Council elections, Neil Gregory and Richard Pavitt, and gained a street level view of local politics.

Coming home from Glasgow where I’m currently studying History and Politics, canvassing was a great opportunity to get involved, to try and make a difference and hopefully learn something along the way. So many people are suffering from a ‘Brexit’ headache caused by the continuous uproar around national politics. What I discovered on the doorstep is that anger and a sense of futility is turning some people away from engaging in local politics. “You’re all the same, useless and self interested” was something I heard.

Being younger than most people might expect of a door-knocking canvasser, for me the opportunity to canvas created a way in which I could attempt to re-engage people with matters close to home, particularly on behalf of Richard and Neil, who I believe have a vision to reignite trust as our local councillors. I really enjoyed engaging with people with completely varied opinions; just the way it should be. Even if I wasn’t studying politics, just looking at the current political climate, it has really struck home how important it is to be making a stand.

Hailing from the Chesterfords end of the ward, I am particularly concerned about the plans to seriously impact the local environment and the way our incumbent councillors seem to be passively accepting it. The idea that the countryside I value most is under major threat from ignorant and unthoughtful development, and our local representatives are doing little to protest, was the strongest motivation for me to go out and canvas on behalf of Richard and Neil.

There are though, many more than just housing concerns that face our ward; I heard on the doorstep about traffic into Walden, waits and delays for medical appointments, concerns for places at schools, the condition of the roads, and so much more. These issues require strong individual arguments and views to be fought for in the council on behalf of the community whether they are parents, children, commuters, locally employed, self-employed or retirees. I encountered many of these different voices whilst canvassing and clutching handfuls of leaflets. Although diverse, people were definitely looking for change.

Canvassing allowed me to have a more hands on approach for the upcoming elections on the 2nd May, but more than that, it allowed me to engage with people e.g. a friendly cyclist who wanted to know why he should be voting for two candidates, a lady packing for her weekend away wanting to know why she should vote, and a baker wondering why she should bother to vote at all. It made it strikingly obvious how politics, especially local, should be about the people and representation of our needs.