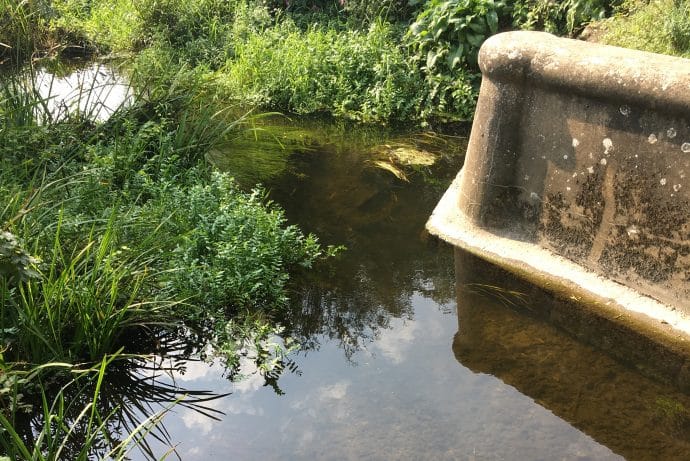 Press release 7/10/20: All rivers in Uttlesford have “failed” a test for chemical pollution according to results published last month by the Environment Agency (EA).

A nationwide survey of 4,600 rivers, lakes and waterways in England produced shocking results. Not one met the standard for priority hazardous substances such as solvents, flame retardents, phosphates and insecticides.

This comes amid growing concern for the future of England’s Chalk streams, a globally rare aquatic environment. Of the world’s 200 or so Chalk streams 80 percent are in the south and east of England and include two of the district’s principle rivers, the Cam and the Stort. Ecologically, Chalk streams have been described as England’s rain forests.

The river Cam has its historic source from Chalk springs near Debden and has faired particularly badly in the EA report. The Chalk aquifer (the underground store of water feeding the springs) is being over-exploited to meet increasing demand from housing developments. This is depriving the river of its natural flow. Last year the Cam was at its lowest level since records began 70 years ago.

A low volume of water means pollutants are not dispersed sufficiently quickly. Also, in the summer, what little water is in the Cam often comprises almost entirely of outflow from sewage treatment works. This puts phosphates in the river which combined with fertilizer run-off from fields robs the water of oxygen, killing aquatic life. Outdated sewage works are prone to overflow putting raw untreated sewage into the river.

“We are paying a high price. Rivers and lakes are engines of biodiversity and their neglect is symptomatic of the low regard for our natural environment. It may be a statement of the obvious but no species including ourselves can survive without clean water.”

Cllr Pavitt is encouraging communities to get involved in monitoring and caring for their local rivers. In his own ward he has helped to set up an action group for the Cam, Curat.org.uk.