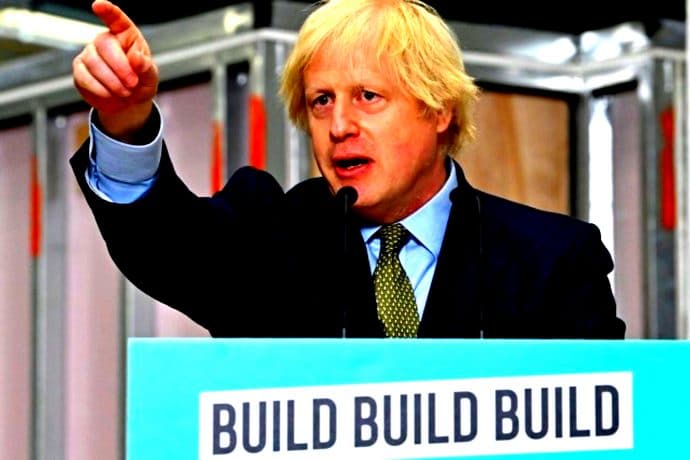 Something is wrong. House prices keep on increasing and the number of people in need of housing keeps on growing. Building yet more houses is the solution, says Govt. But a continuing supply of market-priced housing with a token supply of “affordable” homes is not what is needed. Barely 10% of new builds in 2019 were genuinely affordable homes. The fundamental problem seems to be a reliance on “the market” to provide the solution – which clearly it can’t, or won’t.

House building is a massive part of the UK economy. It has gone far beyond providing homes for families. The construction supply chain, the endless churn of properties, the flood of foreign buyers, these are a money machine that devours land and produces huge profits for developers, builders, banks, the property services sector, and the exchequer. Talk of housing “need” is a convenient justification for development but it is not meeting real housing need.

There are so many questions: Why does Govt indulge the construction industry and landowners while penalising local authorities? Why does Govt continue to encourage so much market-priced new housing in the over-heated south-east? Why does Govt back housing initiatives that keep house prices high while claiming it wants a bigger supply of affordable housing?

There is broad agreement among economists that the effect of trying to bring prices down through supply-side increases is marginal, essentially because housing isn’t a single commodity. It comprises two quite different markets: one for investors and one for residents; and the single biggest influence on house prices has been interest rates. Underlying this, market forces cannot operate efficiently when supply of the most important raw material – in this case, land – is finite and controlled by a small number of people who have their right to profit enshrined in law. In 2018, a House of Commons select committee stated “this right on the part of landowners distorts land prices, encourages land speculation, and reduces revenues for affordable housing, infrastructure and local services.”

Are we building homes to live in, or houses to invest in?

There is clear evidence that the rise in real house prices since 2000 is almost entirely the result of lower interest rates. Years of low rates have made housing increasingly attractive to those with capital, not least multiple-property investors, here and from abroad. In the past 25 years, this has bid up prices by some 160% in real terms so that the average house now costs eight times as much as average earnings. In direct contrast, aspiring first-time buyers have been confronted by tightened credit conditions and a demand for higher mortgage deposits.

So it is no surprise that the majority of young adults are turning for their first home to the rented sector, but the picture here is even less promising. Massive cuts in social housing have pushed tenants into the more expensive private rented sector. In the 20 years to 2017, the number of young adults in social housing fell by some 700,000. The Institute for Fiscal Studies reported that young people’s wages took the biggest hit from the financial crisis of 2008, falling 12% over ensuing years, a disadvantage compounded by levels of student debt and cuts to housing benefit. No wonder so many have to stay with Mum and Dad.

The myth of affordable homes

In 2019, less than 10% of England’s new homes were classed as genuinely affordable, prompting former Conservative cabinet minister David Davis and 27 other Conservative MPs to urge Govt to take serious action to build more social housing, saying “If our policies simply continue to provide only expensive new-builds for the already well-off, and almost unaffordable rents for the rest, then people will lose their trust in the Conservative Party.”

Why then is Govt continuing to underwrite mortgages on properties of up to £650,000 via the Help To Buy scheme? And why does this help to buy only apply to new houses? This £12billion scheme has enriched developers and worse, has kept house prices high. Govt is promoting a new scheme (on behalf of the building industry) called First Homes, offering first time buyers a 30% discount on a new house. Sounds great, but research indicates that in almost all parts of England someone on an average salary could not afford to buy one of these new-build market-priced homes, even with the discount. And how will the discount be funded? It will be deducted from the developer’s s106 obligation so the cost ultimately lands back with the taxpayer.

There is a solution

What we have is a chronic shortage of properties affordable to the young, the lower paid and places to live that provide some dignity to those that cannot find employment, which post-pandemic is likely to be an escalating problem.

Govt could, at a stroke, provide the solution by enabling local authorities or development corporations to acquire land at its basic value (not the ridiculously inflated price that comes with planning consent) and to allow councils to commission house building. Upwards of 50% of the price of a new build in some areas is the land whereas in the 1930’s the figure was only 2%.

Local authorities know what they need and where to put homes suitably integrated with existing communities, with the right social infrastructure, resources and public transport. There are excellent recent examples, places that are attractive, well designed, energy efficient and pleasing to live in. There are just not enough of them because local authorities are deliberately constrained by Govt. This would also provide much needed business for small and medium-size building firms, who have been progressively squeezed out by big developers.

What is standing in the way? The answer, put simply, is ideology plus the influence of vested interests. It doesn’t need a dramatic and potentially destructive reworking of the planning system as proposed in the White Paper to achieve some basic justice and fairness. But if Govt persists in seeking “market-led” solutions in a dysfunctional market the outcome won’t change.

Govt policy should focus on social housing, in the order of say 150,000 per annum, commissioned by local authorities together with development corporations and housing associations and offering innovative ways for tenants to take ownership of their home. Private sector developers would then serve the rest of the market no longer fuelled by dubious Govt-imposed targets.

Doing it this way should be based on three key rules: land is assembled by bodies that do not have a profit motive in the outcome; landowners are paid existing use value (as it would be before planning consent); and developers are then invited to submit competitive tenders for design and management contracts.

The longer Govt leaves it before tackling the real reasons why we have a housing crisis, the bigger the problem will get.

When Boris Johnson proclaimed the need to overhaul the planning system he failed to mention the damaging consequence of the 1961 Land Compensation Act, which gavelandowners the right to receive not just the existing value of their land but also ‘hope value’ – namely the increase in value when planning permission is granted. However, planning consent is often made possible as a result of factors that are a lucky windfall for the landowner, such as publicly-funded infrastructure. In 2018, a House of Commons select committee stated “this right on the part of landowners distorts land prices, encourages land speculation, and reduces revenues for affordable housing, infrastructure and local services. It is fair, therefore, that a significant proportion of this uplift be available to national and local government to invest in new infrastructure and public services.”

Two-thirds of council homes sold off under Right to Buy are still not being replaced by new social housing despite a Government promise to do so. Since the Right to Buypolicy was updated in 2013, 85,645 homes have been sold through the policy, while only 28,090 have been built to replace them.

People will pay a premium to live in some locations over others. That has always been the case and always will be. Uttlesford is one of them. Consequently, developers have been attracted to Uttlesford because they can get higher prices, triggering an upward spiral in land prices, which drives house prices higher still. Eventually, when Uttlesford has been concreted over and no longer is the attractive place it once was, prices might come down. By then, like a swarm of locusts, developers will have moved on to pastures new.