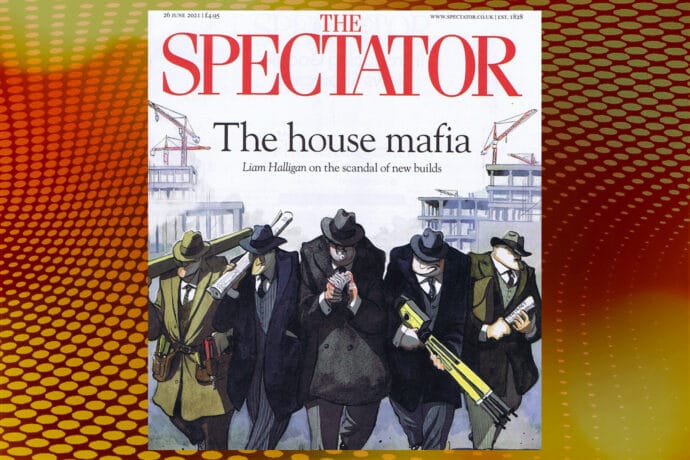 Economist, journalist and Saffron Walden resident, Liam Halligan, continues his crusade to get a better deal for the nation and would-be homeowners. Here is a brief summary of his article in The Spectator of 26th June 2021.

Halligan says that while Boris Johnson is convinced that solving the housing crisis will return successive Tory governments (more homeowners = more Tory voters), attempts by Govt to change the planning system to enable more building sites to be consented will do little to change the dominance of the big builder cartel. Nor will removing local councils from the planning process – which is what central Govt is intent upon. The UK’s big developers have become far too powerful.

Developers hoover-up land and planning consents, only to sit on them, and then build far fewer homes than are needed at ever-increasing prices. Halligan particularly criticises the big players for poor quality, deliberately slowing down construction and suppressing competition.

Planning permission – to quote former Downing Street housing adviser Alex Morton – “is a one-way gift, which boosts the value of land from, say, £20,000 a hectare to upwards of £2million in return for no obligation to do anything beyond breaking ground.

“The six largest firms hold more than a million plots, of which 90 per cent are controlled by just three: Wimpey, Barratt and Persimmon. This is a very long way from being a competitive market.”

The house-building problem needs to be challenged on multiple fronts, say Halligan:

Planning consents should become ‘delivery contracts’ complete with legal obligations to build out within a certain timeframe, failing this means developers must start paying council tax on unfinished units. That would force a focus on building, not land speculation.

The 1961 Land Compensation Act should be reversed, so when land is given planning permission and valuations surge this massive ‘planning uplift’ is shared with local authorities – an idea backed by successive parliamentary enquiries. That would dampen land speculation, making building plots – and ultimately housing -more affordable. It would also fund new infrastructure as new housing appears, revolutionizing the local politics of planning.

Better regulation and protections are needed. New-build buyers making what is probably the most important purchase of their lives have fewer consumer rights than when buying a toaster.

Books on the subject: Liam Halligan has written a book called HOME TRUTHS. He combines analysis with reportage, drawing on interviews with cabinet ministers, civil servants, planning officials, property executives and homebuyers. His is one of three books presently published that come at the subject from different angles but all draw the same conclusion: the power of vested interests mixed with ideology and incompetence is resulting in policies that will never deliver fair housing solutions.