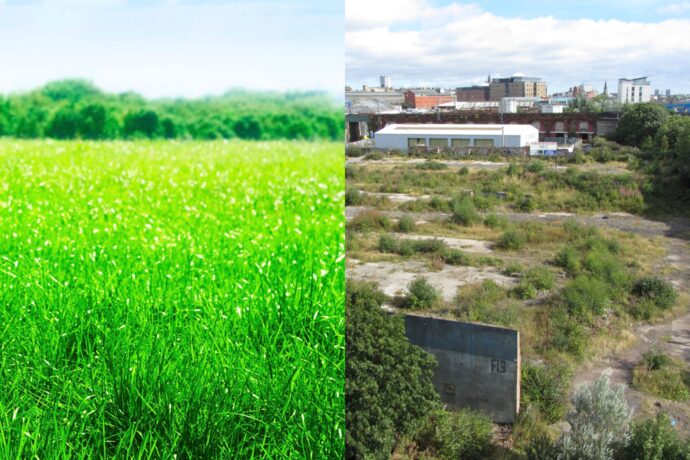 Countryside charity CPRE has called for a “comprehensive brownfield first” policy to be built into national planning policy.

CPRE (Campaign for the Protection of Rural England) says dwindling use of brownfield sites is contributing to a “tragic” loss of green fields with the proportion of sites on local authority brownfield land registers that have planning permission now the lowest on record.  Just 44% of housing plots held in sites on local authority brownfield land registers had planning permission, down from 53% last year, despite recent government rhetoric promoting development on previously used land.

CPRE also points to government data showing the proportion of land changing use to residential which came from brownfield has collapsed from a peak of 70% in 2008 to just 38% in 2017, the most recent year for which the data is available. This contrasts with the  volume of identified brownfield sites actually growing and currently providing land for nearly 1.3m homes.

At the same time, the volume of greenfield land changing to residential has risen by 146% as house builders have been permitted to focus their efforts on simpler and often more profitable greenfield sites. Housebuilders typically argue that the existing use value of many brownfield sites, plus the cost of remediating them, makes many unviable to develop without significant government subsidy.

The current National Planning Policy framework (NPPF) says councils should make “as much use as possible” of brownfield sites, but stops short of requiring brownfield sites to be used before greenfield sites.

Emma Bridgewater, president of CPRE, says a brownfield first policy is sound good sense. “It is wasteful and immoral to abandon our former industrial heartlands where factories and out-dated housing have fallen into disrepair. Developing brownfield is a win-win solution that holds back the tide of new buildings on pristine countryside and aids urban regeneration at a stroke.”

West Midlands Mayor Andy Street, who has tried to promote a “brownfield first” policy in the region since being elected in 2018, speaking in response to the report, said: “The simple fact is there is no excuse to destroy the countryside while so much brownfield land is available for housing, which is why in our region we use the cash we’ve won from Government to pay to clean up derelict industrial land.”

Boris Johnson has signalling a desire for more development on brownfield land. He said there is a lot of room to build homes for young families, “not on green fields, not just jammed in the south east, but beautiful homes on brownfield sites, in places where homes make sense.”

Uttlesford, like other rural districts especially in the south east, is a priority target for developers. Green fields tend to be much more profitable to develop. We don’t have much brownfield and what there was has been developed over the past 20 years. There is far more brownfield available among the formerly industrialised towns of the north than there is in the overheated south east. Much depends therefore on progress with Govt’s plans for levelling-up if we are to save prime agricultural land and rural landscapes from destructive and over bearing development.