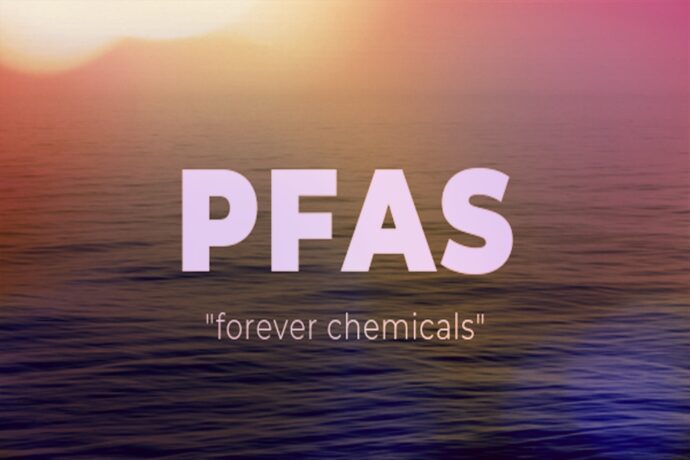 Anyone who has seen the 2019 film Dark Waters will be acutely aware of the toxic affect of a group of chemicals known as PFAS and their devastating effect on health in the US. Here in the UK it urgently needs attention.

The US, EU, Australia and other nations have legislated to ban or control PFAS and to require testing of drinking water, while the UK has done ….. nothing. Well, not quite nothing. In August 2021 the UK Govt published the results of water testing that “suggests” PFAS chemicals are widely present in English surface waters and groundwater. Everyone knows they are but no one in authority will admit it.

PFAS (per- and polyfluorinated alkyl substances) is a group of chemicals that persist in the environment because they don’t break down. They are used for their water and grease repellent properties in everything from cookware and clothing to furniture, carpets, packaging, coatings and firefighting foams.

When PFAS enter the environment they accumulate in soil, water, animals and humans, and have been linked to a wide range of health impacts. It has also been shown that these chemicals can be passed on from mother to baby via the placenta and through breast milk.

The most studied chemicals of the group are known endocrine disruptors. They have been linked to thyroid disease, obesity, high cholesterol, reproductive issues and the development of certain cancers, including kidney and testicular cancer.

It is a sad indictment of corporate influence over environmental protection that these chemicals have remained in common usage for so long. What is needed is decisive action, now! These chemicals have a cumulative effect. Stopping or at least substantially reducing their supply and use within the UK  – and thereby reducing their concentration in our drinking water – will allow future generations to avoid the worst cumulative impact.

The 8th Feb 2022 edition of The Guardian broke the news that an excessive level one of this family of manmade chemicals, perfluorooctane sulphonate (PFOS), was discovered in water supplied to households in Stapleford and Great Shelford.    click here to read the Guardian article.

About Dark Waters, the film

The film tells the true story of how an heroic lawyer brought a case against the all powerful DuPont Corporation after the company contaminated a town in West Virginia with PFOA, the chemical used in the manufacture of Teflon. Fighting the case took a heavy toll on the lawyer’s health and marriage but after more than seven years he wins a test case and DuPont ends up paying $651million to 3,500 people who developed diseases as a result of the contamination. It is a modern David versus Goliath story that exposes the tip of a very deep scandal that continues to this day.