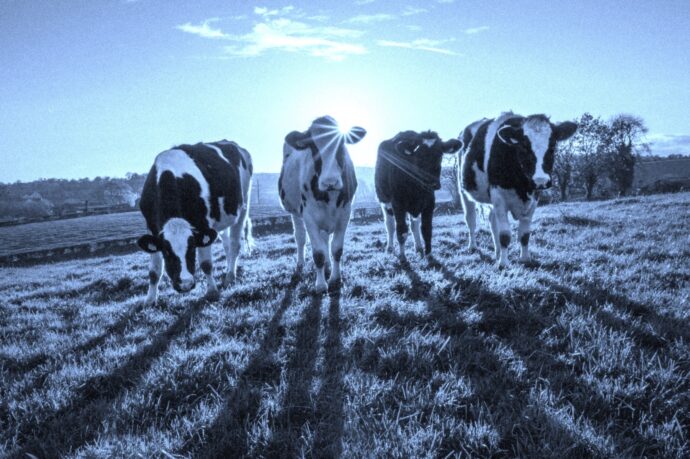 Farming and wider land management together with our eating habits have an important role in achieving a net zero economy and an ecologically vibrant countryside. The following is extracted from an article by farmer and author, James Rebanks, first published in Unherd (a source of independent thinking we would recommend).

Agriculture in the UK contributes about 10% of the nation’s greenhouse gas emissions but when we look closely at the subject it turns out that about 60% of the problem is associated with growing crops. This won’t surprise anyone who has watched Clarkson’s Farm. In some plant crop systems, the ratio of fossil fuels used in a fertiliser to the amount of food energy created is sometimes as disastrous as 10:1.

The other 40% of agricultural emissions are associated with livestock — largely thanks to the massive numbers of intensively indoor-raised livestock, eating human foodstuffs such as grain or corn. But if cattle graze on green (and permanently unploughed) pastures, with a healthy number of trees and hedgerows in the mix, and if those pastures are rested for long periods so plants in the soil optimise the downward flow of carbon through their roots, and (crucially) the livestock aren’t fed grain, then it is entirely possible for farms to sequester more carbon than they release. Such farming may result in fewer cows, and more expensive meat, but it can be done.

What we need is thoughtful reform of our whole model of food production so that farming is more mixed (including livestock and cover crops), more rotational, and with landscape design which is sensitive to the habitats and processes that British flora and fauna need.

We need to gradually regulate out of existence some of the worst fossil-fuel-reliant forms of farming and raise the cost of fossil fuels in agriculture. We need to grapple with the power of the cartel of supermarkets. We need to rebuild local food systems, such as local abattoirs and food markets.

There is no such thing as an ideal global diet, Britain has a temperate climate and is brilliant at growing grass and grazing livestock. We can also change our diets to eat more British fruit and vegetables from local small-scale horticulture, as this has a small land-use and is super productive. But when we do these tricky but essential things, we then need to protect a more progressive British system from being undercut by more ecologically destructive systems overseas.

Keeping the ecological footprint of our food as British as possible is almost certainly a good idea. It is not a choice between farming or nature, but how we marry the two. To do that we need brilliant thoughtful farmers and inspired local food systems.