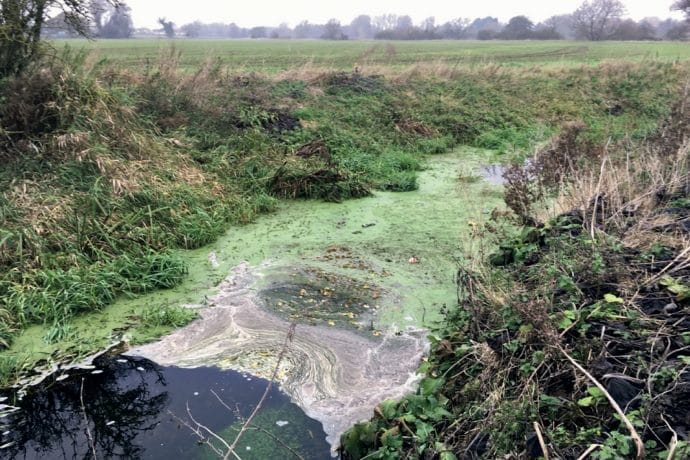 RIVER CAM TESTING: THE RESULTS ARE IN!

Laboratory tests of water samples from the Cam in Uttlesford confirm our worst fears: Phosphate levels are several multiple times higher than the acceptable maximum. This points to serious neglect by Anglian Water and the Environment Agency (EA). Very often agriculture is blamed for nutrients entering rivers but in this case it is clearly related to sewage.

For the past two years Richard Pavitt has been using a handheld device to test the river, which in recent years has shown signs of considerable stress. More research and detailed third party validation was needed. Step forward Cam Valley Forum, a long established river group based in Cambridge. One of their experts, Dr Mike Foley, took samples at 8 points along the river. These were sent to South East Water Scientific Services.

This confirms the major source to be water recycled by sewage treatment works (STWs) at Quendon, Newport and Great Chesterford. However, the real eye opener is the discovery that none of these locations has ever had its phosphate output limited by the EA and that Anglian Water has chosen not to protect the river by applying a voluntary limit.

Human effluent, detergents and other household substances contain phosphate. Excessive nutrient accelerates algal and fungal growth, robbing river water of oxygen. When river levels are low the impact is even greater and with drought an ever present threat the ecology of the upper stretch of the Cam could go into a nutrient-induced terminal decline.

As more and more houses have been built in the villages along the B1383 so those STWs have been processing far greater volumes of sewage than they were designed for and recycling ever higher volumes of phosphate into the river. Why has it taken nearly 20 years for anyone to pay attention to the damage this is causing? Did previous UDC administrations simply turn a blind eye while collecting a bonus from Govt for every new house built?

Photo: The Cam between the Chesterfords. This is not how a chalk stream should look. Worse still, this was in winter.

Instead of dealing with widespread pollution of England’s rivers and coastal waters the Govt has simply kicked it into the long grass, postponing proper action by decades. Did MPs who voted for this think that no one would notice, or care?

Routine sewage dumping is a scandal. As early as 2003 the EU Commission gave the UK formal notice that water companies were acting illegally by routinely dumping sewage in rivers. The law continued to be ignored.

Then, 20 years later, the Govt legalised sewage dumping for the next 28 years. The only requirement placed on water companies is that they must demonstrate they are taking action to “reduce the adverse impacts.”

No one has yet defined what that means or how it will be measured. Since that vote in Parliament to let the water companies off the hook, sewage discharges into rivers and coastal waters have increased. If you’re wondering how our MP voted, she voted with the party line.

The EU’s deadline for UK rivers to achieve ‘good chemical status’ (which none in England do) has been put back several times. At the moment it is 2027. Govt wants to postpone it to 2063. Yes, 40 years away!! This new deadline will take the place of EU regulations when they have been swept aside (planned by Dec 2023). The river Cam has been identified as polluted with PFAS ‘forever chemicals’ linked to thyroid disease and cancers.

Antibiotic-resistant strains of E.coli and Staph. aureus, which can cause serious infections in humans, have been found in rivers adjacent to pig and chicken factory farms and in slurry runoff from intensive dairy farms. Some of the samples showed resistance to antibiotics that are classified as “highest-priority critically important for human medicine”. This is not yet a high risk in Uttlesford’s rivers but is yet more evidence of a fundamental breakdown in environmental pollution controls.