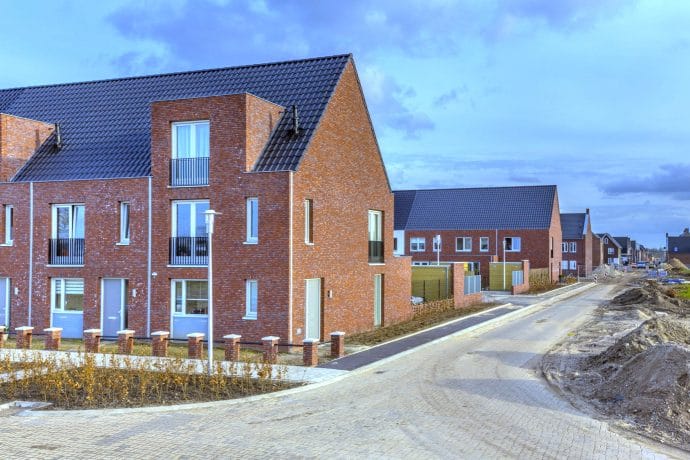 Deputy news editor of Inside Housing magazine, Nathaniel Barker, got what he describes as a “medium-level pasting” on Twitter when he declared “the government’s target to build 300,000 homes a year is madness and should be scrapped.” That said, he also got a lot of support for his views published in March 2021.

In a considered article Barker sets out why the target is “rooted in a philosophy which is inherently flawed, leading government to do irresponsible things that will fail to solve housing problems, while throwing a bunch of new problems into the mix.”

Before explaining Barker’s thinking (and he is not alone), first some background:

• At the end of September 2020 there were 93,490 households in England in temporary accommodation, including 120,570 children, a dramatic rise since 2010 and continuing to rise despite new legislation in 2018 aimed at cutting homelessness.

• Another 541,000 people are estimated to be sofa surfing and more than 1.1 million households are currently on the waiting list for a social home. Supported and sheltered housing is in woefully short supply, leading to significant (and costly) social issues and leaving tens of thousands of people stuck in unsuitable accommodation.

• In response to the growing crisis ministers unveiled in 2017 their response to the housing crisis: a target to build 300,000 homes in England annually by the mid-2020s, a figure apparently rounded up from the 265,000 homes a year needed to keep up with demand.

As Barker explains “on the surface, the logic behind rounding up is easy to follow. For the most part, England’s housing crisis is an affordability crisis. Basic laws of supply and demand would suggest that building more homes than we strictly need should therefore drive down prices and make housing more affordable for everyone.” But the reality is complex.

In a 2019 report for the UK Collaborative Centre for Housing Evidence, economist Ian Mulheirn argued that modelling shows “that even building 300,000 houses per year in England would only cut house prices by something in the order of 10% over the course of 20 years”.

For context, Land Registry figures show that the average house price in England rose 286% in the 20 years to the most recent data. There are two ways of looking at this says Barker: “either the gains made by boosting supply are so little that it’s not worth doing, or 300,000 is still woefully short of what’s needed. Either way, says Barker, the 300,000 target is not going to solve the problem by itself.”

Also relevant are the findings from Sir Oliver Letwin’s review of build out, of which Barker remarks: “developers drip feed the market with new homes in order to prevent a glut which would slash the value of their product. Of course they do. They would be crazy not to. The idea that house builders are going to knock up so many homes so that we can all have one on the cheap when the current approach has contributed towards record profits in recent years is not, I would posit, particularly credible.”

In any case, says Barker “the supply and demand argument is rendered effectively moot by the fact that government clearly does not have an overarching strategy to bring down house prices. That much is evident from its continued commitment to policies that inflate house prices.

“So that’s one aspect of my beef with the 300,000 target: its weak evidential basis. The other major aspect is the type of policy that such a target encourages.

“Ministers appear to have developed an unhealthy obsession with chasing overall house building numbers with little interest in much else and scant regard to the possible ramifications.”

Then there was the proposal to exempt developers from needing to deliver affordable housing on sites of up to 50 units – which Barker questions: “surely the opposite of what’s required as the number of people struggling to pay private rents soars due to the coronavirus pandemic.”

Meanwhile, cowed by the outrage among Conservative backbenchers at its previous effort, the government has rejigged its house building algorithm to place whopping targets on various (overwhelmingly Labour-controlled) cities.

“Councils may well need pressure from central government not to build at the bare minimum,” says Barker “but no one can surely believe that Southampton is going to be able to increase development by 201%.”

More sensible, says Barker, would be “a suite of targets actually based on housing need across England including, crucially, specific goals for affordable and social housing. Or, better yet, targets based on outcomes we would all like to see: a reduction in households in temporary accommodation, for example.”

He remarks: “I once asked the Ministry of Housing, Communities and Local Government via Freedom of Information request for its analysis of the homes needed for each tenure across England. Remarkably, the department’s response was that it has done no such analysis.

The 300,000 homes target is a woefully simplistic and fundamentally flawed response to the issues with our housing system, which says Barker have set in hard and deep over decades. It pushes ministers towards the point where they can say, “huzzah! There, we built 300,000 homes this year. Housing: done”.

“But if and when that point comes,” Barker continues “on our current trajectory there will be little benefit to the millions struggling to get a foot on the housing ladder. There will still be staggering volumes of people in deeply unsuitable homes and sickening numbers of families with no proper home at all.

“What’s needed, now more than ever, is a seismic shift in our housing market – and the 300,000 homes target is little but an unhelpful distraction.”

Our comment: We live in a target-driven culture in which the reasons for a target often end up lost in the mists of time. Instead of being a means to an end the target becomes a means unto itself with an unstoppable momentum that bulldozers everything in its path (the latter analogy seems entirely appropriate). Govt has set us on a course to build one million new homes by the end of this parliament but as for fixing the problems that gave rise to the target in the first place, that seems as far away as ever. Of those one million homes, it’s a fair guess that roughly one third will be purchased as investment properties; a further third purchased on the open market by owner-occupiers; and a third made available as supposedly affordable (i.e. discounted first homes) together with a mixture of shared ownership and social rent, this being a condition of consent to build the two-thirds that are market priced. But there is no guarantee that what little affordable housing is provided will be in an area where it is most needed or be a sustainable proposition for those who will live there.